Skip to content
The NEW JM Essentials Line is Live! It's a Black Friday miracle.

WOW. What a weekend. No, I’m not talking about Cinco de Mayo, but let’s just say I consumed a good amount of alcohol on said day.

BUT, we swept the Indians, have won 6 in a row, and are 15-1 in our last 16….holy shit. That’s all I can really say. It’s going to be tough to be able to express how amazing this team has been.

Every time we look down and out, we turn into the Terminator…

Except it’s “We’ll be back.” Because we’re a team…get it? And yes, I know I throw a lot of Terminator gifs in these posts. It’s not even one of my favorite movies, but it’s just very applicable. That, and the fact that I truly believe Giancarlo is a cyborg. But I do not need to get into that today…

This was a super fun game. Until we blew the lead. Then got it back. Then blew it again. Then won!! Jeez, this was such an emotional and up-and-down game.

It’s hard to experience so much joy, sadness, anger, and jubilation all in the span of one evening. But, that is exactly what went down on Friday night.

We got a nice little mix of the #youthmovement, paired up with an old reliable future Hall of Famer. Yes, CC Sabathia will be a Hall of Famer.

And goddamn, this man must have found the Fountain of Youth, because he has truly turned back time. Or maybe he’s a vampire? Don’t vampires remain young by sucking the blood of unsuspecting victims…come to think of it…that could be CC.

Whoa. I might have stumbled upon a shocking truth. But don’t worry, CC, your secret is save with me. And all the people who read this blog. Okay, okay, back to the game.

On the offensive side, it was the Baby Bombers making their presence known. GLEYBER! This kid hit the first dinger of his career, knocking a massive 3-run shot to get the fans up and jumping. Gleyber earning his pinstripes over and over again.

Judge saw the crowd cheering for Gleyber and got, I think, a little jealous. He was like “hey guys, it’s only my second year! I’m a young phenom too! I can still hit homers, memba?!

Yes, Aaron, we memba. Judge hit a solo shot, followed by Gary the next inning, probably also feeling jealous since he came up before Judge did. I love this. All these young guys are pushing one another to get back into the limelight – what’s better than that? A little friendly competition gives way to lots and lots of homers. This is fun!

But then, it became not fun…Betances pitched a shut down inning, but Shreve and D-Rob had nothing going in the 8th.

They each gave up home runs and, in the blink of eye, the Indians scored 5 runs. Like come on guys…the bullpen cannot do that. All that fun of happiness of being up 5-0 was shut down real quick. Like a sucker punch to the stomach. I’ve had that happen to me before – not fun.

But, this was only the beginning! The best part about this team is that they never give up. Like the Trix cereal rabbit, we are determined! Except, unlike that rabbit, we are usually successful. Sorry, rabbit

We were able to get the lead back in the bottom of the 8th, thanks to Judge getting walked with the bases loaded! It would’ve been nice to get a few more insurance runs, but Chappie should hold things down – right? WRONG.

Chappie, I don’t wanna get mad at you, but this one was frustrating. Gary and Chapman were more out of sync than Justin Timberlake and the rest of NSYNC. I guess that’s why he went solo..but yeah, a wild pitch allowed the Indians to tie it and we were back in the same situation.

But, another failure led to some big time heroics! Cue, more of the #youthmovement!

MIGGY ANDÚJAR! HE CAN DÚ IT! HE DID IT.

After a lead-off double by Giancarlo (attaboy Terminator), Miggy knocked him home later in the inning and that’s it! Ballgame over! Crazy and unpredictable game, but because it ended with a dub, it was all worth it. Great to see Andújar have a huge walk-off win so early in his career. The first of many, of this I am sure.

Buttt in the future, let’s not squander 5 run leads set up by CC. Cool? Cool.

Game 2 on Saturday! Chugging right along…this is going to be a very long recap. But we have no game tonight, so you have plenty of time to read! Maybe read it as a bedtime story? Grab some cookies, a glass of milk, or perhaps a beer if you’re 21, and let good old Johnny Pinstripes tell you ’bout some Yankees baseball.

A nice, scrappy game stuck in the middle of two big walk-offs. Obviously the most underwhelming of the 3 games, this Saturday matinee was the Ringo Starr of the weekend. Paul was Friday and John Lennon is Sunday. Sorry, George, but you’re too irrelevant to even be included in the weekend. Besides, Ringo is always the one who gets roasted…

Look at the speed on his fastball as he jumped out of the car! Lightning fast!

This was a very interesting scoring game for us. We tacked on 4 in the 5th, with only one hit. Our runs were scored as follows:

Romine walked which scored a run, grounder by Lil Toe is bobbled by Lindor as he made two errors and we scored 2, and sac fly by Gardy.

Neil Walker’s walks lead to big things! Jomboy has been saying that for weeks now, and it looks pretty damn true. I could also see the YES network giving Neil Walker his own half hour show, as long as we don’t trade him. Not because he’s all that interesting, but just because that pun is too good to not profit from.

I have no idea what the show would be about though. Maybe a late-night talk show? Maybe a Neil Walker cooking show? Or maybe a whole show of Walker walking around Yankee Stadium, talking about random facts.

Imagine Walker just circling the stadium spewing out things like “The original Stadium opened in 1923.” “It was known as the House that Ruth Built.” LOL

“Walker’s Walks” is this perfect show for YES during like the 1 or 2 am time slot. You know, the time when nobody is watching YES? Except for the guys who fell asleep with the TV on after a game that ends around 10.

Anyways, after the 4 runs, Gardner added a RBI single a little later and that was the extent of our scoring. It’s nice to put up 5 runs with barely any effort. It’s like those jackasses back in high school who would never study and would still get A’s. Those kids sucked. But in the Yankees’ case, it was a lot of fun on Saturday!

They threw D-Rob in there to close things out, who fared much better than he did on Friday…keep goin, David.

And NOW…Game 3: The John Lennon game! If you’re totally confused by that statement, then you definitely skipped earlier parts of this article.

DOMINGO GERMÁN is the real deal. No question about it. First big league start, the man was pitching a NO-HITTER. We all knew Boone was going to take him out, but it still sucked to see it happen. I was only 5 when David Cone threw the last no-hitter/perfect game for us…in other words, I cannot remember actually seeing a Yankees no-hitter.

Germán was more locked in than Joey Chestnut at the Nathan’s Hot Dog Eating Contest. All jokes aside, he looked incredible, which is a pleasant surprise after losing Monty last week.

I don’t agree with Boone’s decision to pull him, but I understand it. He had a pitch count limit, and had already exceeded it by the 6th. What I DON’T understand, is Boone leaving Betances out there for the 8th.

You cannot leave him out there. He cannot handle it anymore. You got a solid 7th out of him, leave it at that. But Boone is still learning how to be a manager. That means there are going to be some growing pains early on. And then he puts in Holder! WTF..

So, those damn Cleveland Gnats, oops, I meant Indians. Sorry, I was having flashbacks to the ’07 ALDS. The Indians took a 4-0 lead and I got a little discouraged. But, I forgot what our team is this year: THE COMEBACK KIDS!

Gardy got the party started with a RBI single. Judge followed it up with a massive 2 run double. Then, the Indians intentionally walked Didi to get to Gary. Crazy.

It shows you just how good Didi has been recently. It was a smart move on their part though, as Gary flied out to centerfield.

Boone let Shreve pitch the 9th, which was another ballsy move by the skipper. Again, I know he’s learning, but Aaron, we need you to figure things out soon. We’re an amazing team, but we cannot deal with these managerial mistakes all year!

Hicks got things going with a deep double…and then Neil “Walker’s Walks” Walker drove him home with a double of his own! NEIL! You can do more than just walk?! That’s huge if true! Just like that, we tied the game up. Never count this team out.

After a Miggy ground out, they intentionally walked Giancarlo to face the rook. The phenom. Gleyber Torres.

AND THEN, this happened… 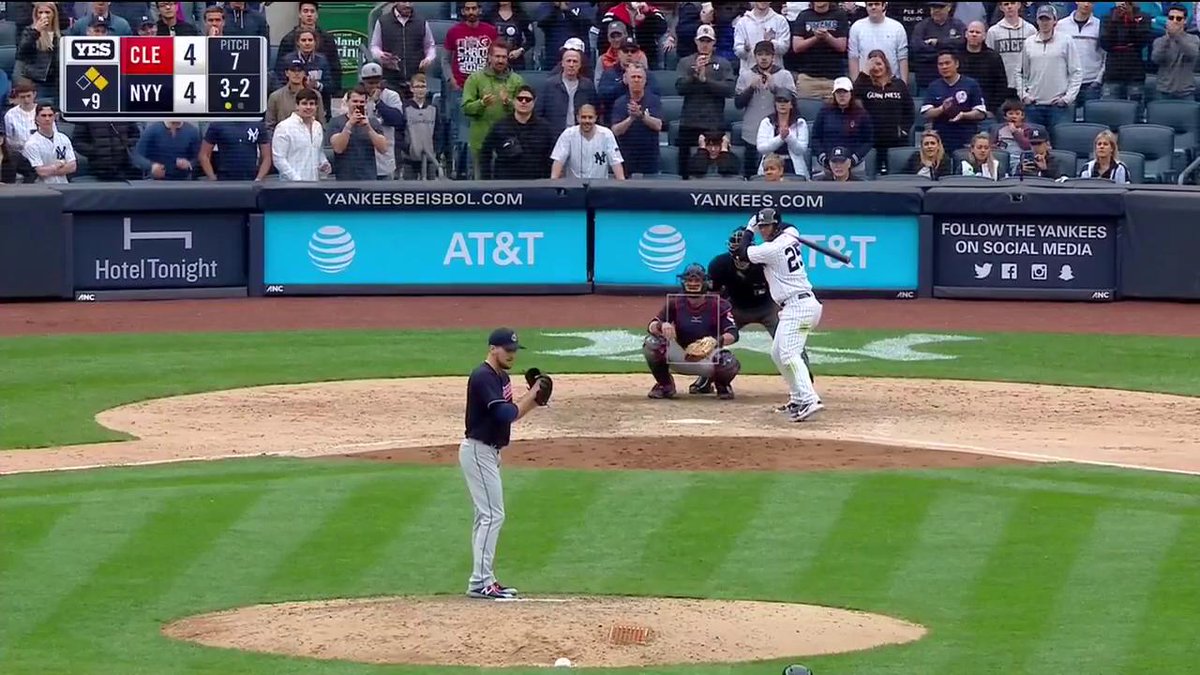 GLEYBER!!!!! ARE YOU KIDDING ME?! A WALK-OFF HOME RUN TO COMPLETE THE COMEBACK!! THE 21 YEAR OLD SUPERSTAR!!

I was freaking out after Gleyber hit this shot – un fuckin’ believable. Shouting at the top of my lungs. This kid is something special. I feel like I say that about all the young guys on this team, but he has the IT factor. He didn’t shy away from the pressure…instead he settled in, and mashed a 3 run game winner to right center. Amazing.

He’s also the youngest Yankee to ever hit a walk-off home run.

And when you remember that Cashman traded Chapman for Gleyber, you realize just how much of an evil genius that Brian Cashman truly is… 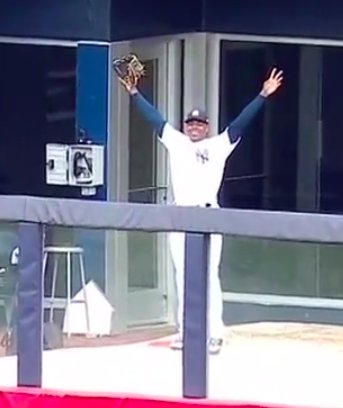 And we have Chapman back anyways HAHA. I love being a Yankees fan!!

WHAT A WEEKEND! What a sweep, what a team..this is so much fun.

Judge, Gary, Sevy, Gleyber, Andújar, Germán..All of these guys came up through our minors and they have arrived. It is so exciting to be a fan of this team right now.

Now, we have a date with the Red Sox. We’re only a game behind them and we also happen to have the best two records in baseball. I’m hoping this series will be as good as the last few!

ALSO, I’m going to the Stadium tomorrow and I am PUMPED! Sevy’s on the bump and its my first ever Yankees-Red Sox game live. LET’S GOO!

Let’s keep on winning and as always…

P.S. I will leave you with Jomboy’s edit of ‘This Magic Moment’ because it is amazing 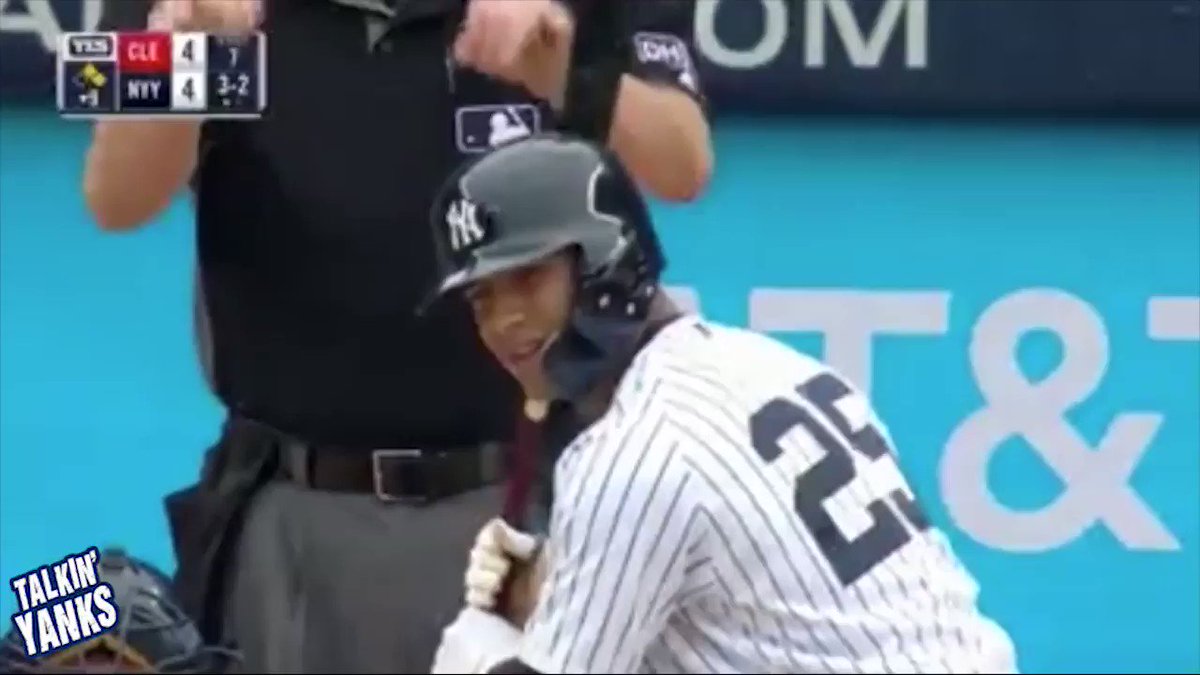